Photos of us enjoying our Hot Fudge Sundaes at Ron and Paul’s last night. 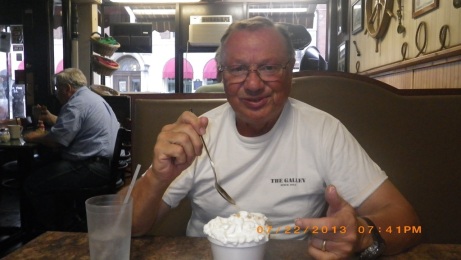 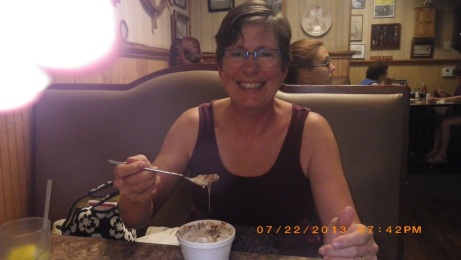 Last night it rained on and off and continued until early morning. Today was the start of our 2-day layover in Waterford. We would start out the day with breakfast at Ron and Paul’s on Broad Street just off of Third St which ends at the Visitors Center. They have a good $2 breakfast special of 2 eggs and 2 slices of toast. They have other breakfast meals and lunch type meals and are open 6am to 9pm. The same waitress that captured Phil’s attention is still there but more casually dressed. Everyone is nice there and the food good with nautical decorations inside. BTW, cigarettes are $10.50 a pack. 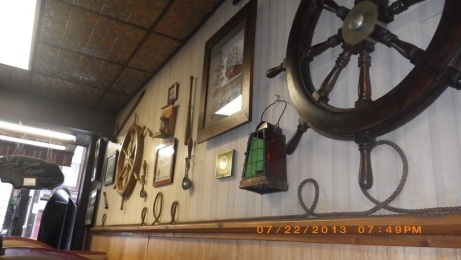 After breakfast, Phil went back to the boat to working on removing the broken battery charger and put in the new one. I continued down the road to Hannafords supermarket, east on Broad Stand just across the bridge over the Hudson River. The Price Chopper grocery store is still there, but their docks got washed away in the flood from Hurricane Sandy. When I got back to the boat, Phil found out that he needed a 115V receptical end for the wire ( the end on an extension cord you plug the item into). Phil walked to Phillips Hardware on Rt 32 about 1.3miles away. He was able to get what he needed, but it has just the basics; no funnels for me to use to collect water from the Dodger tracks.

One of Lorraine’s goal while we had good WiFi was to download the videos that came with the TRX Suspension trainer to her laptop and then sync them to her iPad. It took a few hours, but she was successful! Yeah! Now when the mast gets up, I’ll have a place to try them out. Phil is skeptical about if I’ll ever use them. We will see.

We both were reading and doing our own thing in the afternoon until Lorraine on her way to the restroom met Stan and Elizabeth on S/V Dream Walker a Islander 36 back from spending 2 years throughout the Bahamas and Carribean. They had a wealth of information and came back to Changes to show Phil the device a local made for Elizabeth to legally catch lobster in Granada. I wanted Phil to see it so hopefully he can make one. They plan to be home in Vermont for a couple years and go off cruising again. 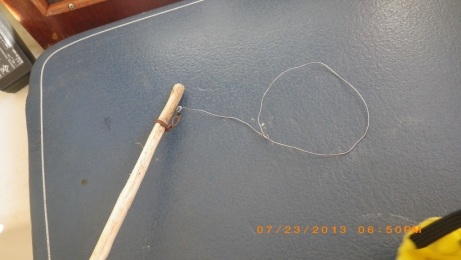 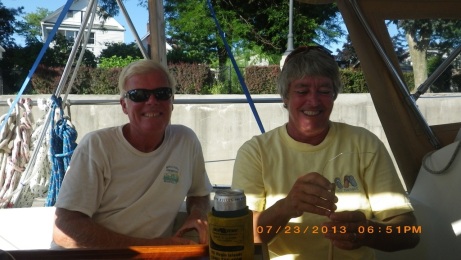 A little later we had the opportunity to meet David’s wife, Julie, from France on S/V Juls, an Island Packet (IP) 31 like Earla and Embert’s at GRYC. He’s from Spain but they bought the boat in Port Clinton and are going to the Bahamas. While talking to David and Julie, we met Mac and Nancy on S/V Captain Morgan, a Catalina 42 from Waukegan, IL just north of Chicago. They are going to Long Island Sound and the Bahamas too. Both are leaving tomorrow morning to get their masts stepped and Mac will need to get some work done on their rigging. We’re hoping that we see them again along the way.

It turned out to be a hot day once the rain left and the sun came out, so Lorraine took advantage of the showers. Oh, we did collect MORE water until the buckets were overflowing, which amounted to about 6 gallons so I think that we’re set for shower water for now.

We once again splurged and had breakfast at Ron and Paul’s, then took postcards for the grandsons to the post office. I haven’t heard yet if they have gotten any yet. Then we walked back and filled the water tanks. They were only about half empty, but fill them when we have easy availability of water.

The couple from M/V Glazmor came by the boat to invite us over after they return from grocery shopping and late morning we visited with them down the dock. Daniel and Jackie’s boat is 58′ motor catamaran custom made out of plywood made in La Rochelle, France where they are from. This is their 3rd season cruising and will spend some of the winter in Florida then come over to the Bahamas in February. They had the boat shipped to Martinique in the Caribbean and then have been cruising 10 mo a year since then. We received a lot of good tips and enjoyed their company even though we had to navigate trying to understand each other, though Daniel does well with English. I got to use my language translating app on the iPad, and it helped when we got stuck. 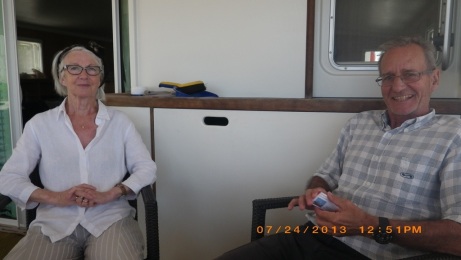 They will be finishing up their cruising career next June, but will put their boat up for sale this fall. Jackie loves to write and paint and has made a beautiful paper blog of their travels including brochures and pictures cut out appropriate to the area she is writing about. Wish I could read what it said, but of course is written in French. At least if we email each other, we can translate it easy enough online.

Dinner was pork tenderloin on the grill, sweet potatoes, potatoes and Brussel sprouts in foil packets on the grill. Even though it’s much cooler and lower humidity, we don’t want to heat up the boat.

We had one excitement this afternoon when a HUGE commercial barge and tug boat went by us to enter Lock 2. 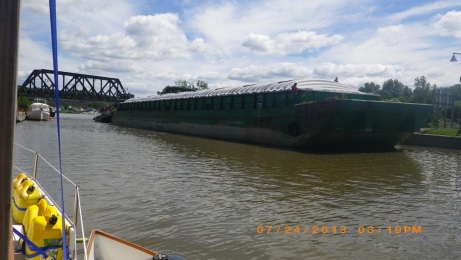 There was about 5′ of clearance on the port side and a foot on the starboard side. 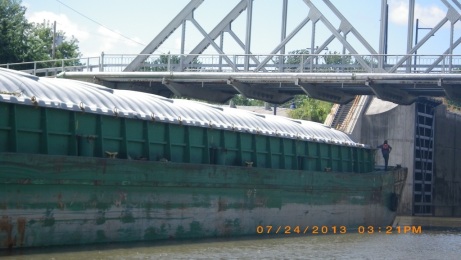 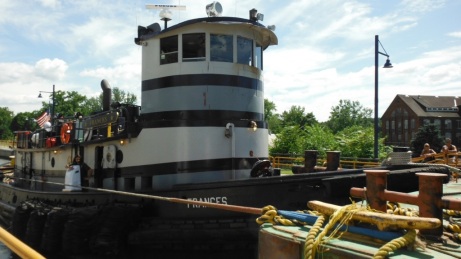 We walked quickly up the path beside the old Erie Canal locks to watch as the barge rose up the lock. Then we watched as it exited the lock. 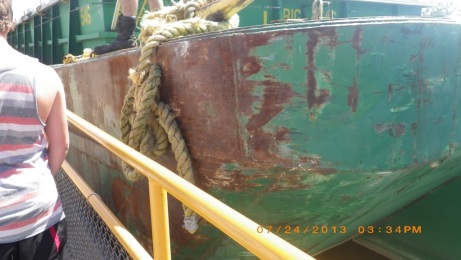 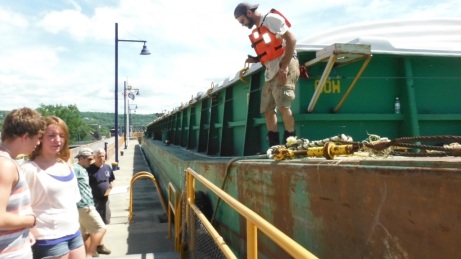 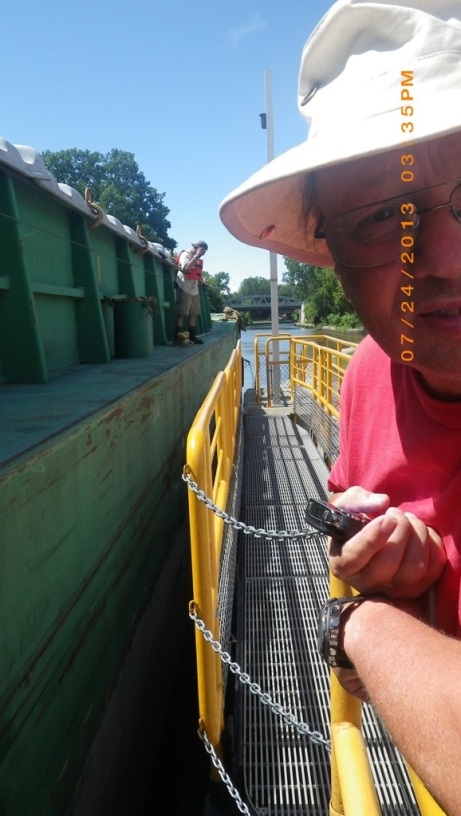 I took a 4 min video of the tug Frances pushing the barge around a corner, then the tug tied up to get off a broken air condition and get some items on board, which included a new A/C unit, a chest freezer and two very long hanks of white nylon rope. 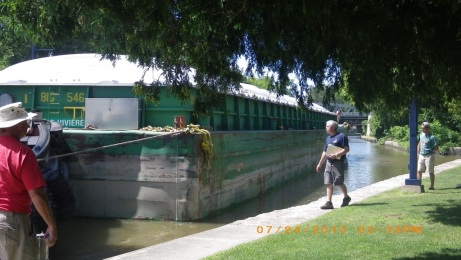 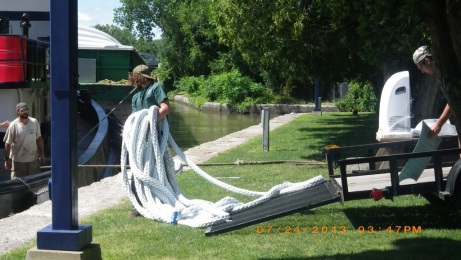 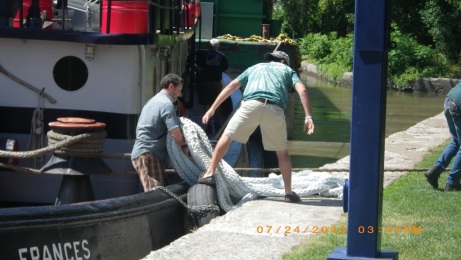 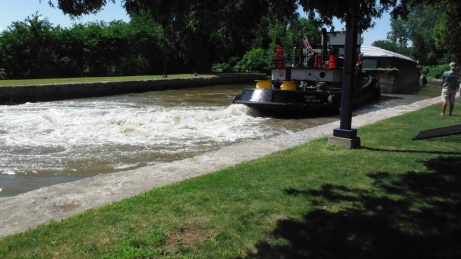 The workers took the appliances out of the boxes and returned them to land. Hey! I needed a big flat piece of cardboard to make my 20″ dia circle for my smile zippers for my canvas projects. Here was my perfect opportunity. He was quite happy to cut a side of the box off and we learned that this barge was full of corn to be made into ethanol, but they had brought wheat from the Great Lakes here and they also transport vaults to hold the fuel for nuclear reactors. The locks being closed for 35 days did hurt their cash flow, but at least they had a barge west of the closure so it was still able to keep working. They are making up for lost time now.

On our way back to the boat, we walked more slowly past the old Champlain Canal and the older locks of the Erie Canal. Hope you enjoy these pictures. 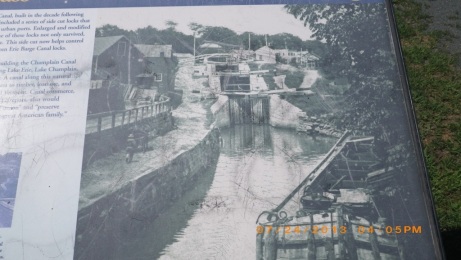 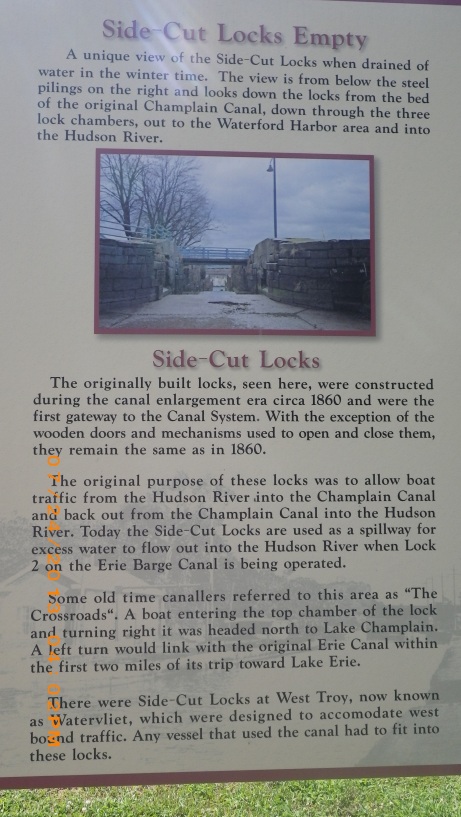 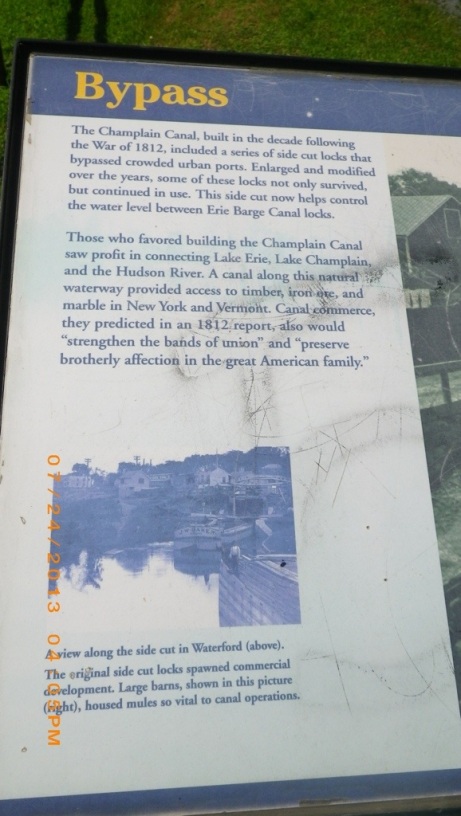 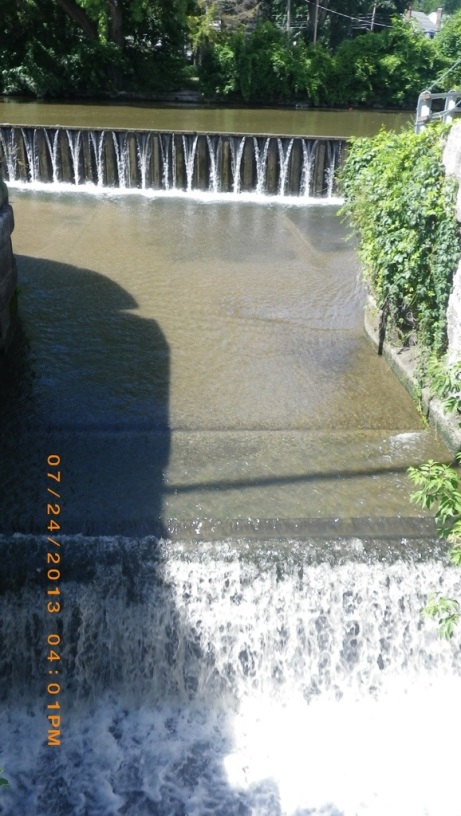 Looking down the step locks now for overflow 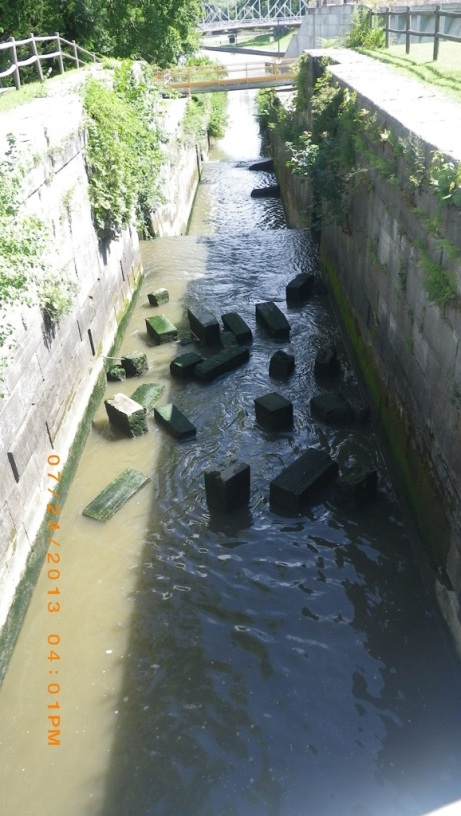 Tomorrow morning we will leave to go to Castleton Boat Club to raise the mast. We hope there isn’t too much boat traffic on the Hudson as it rocks the boat when you’re tying to get the mast in the hole.