We left Napatree Beach anchorage at 7am, this time missing the rock. After we had rounded Sandy Point and passed the Middle Ground Breakwall that protects Stonington Harbor we all of a sudden slowed down from something catching on the keel. The boat knot meter said we were going 6.1kts, but out GPS was down to 4.9 kts in 90′ of water! After slowing down and backing up, we heard a POP and a bubble on the starboard side but didn’t see anything more. When we resumed forward momentum, what ever had been up against the keel had dropped away. Just so you know, there weren’t any buoys marking nets or crab traps around. Go figure! On our way to Block Island, we saw a 6 spreader huge sailing yacht motoring in the opposite direction. Phil says Cptn Dave has a name for them from Newport. What is it Dave? We motored the entire trip to charge up the batteries and there wasn’t a lot of wind, so we arrived and were anchored by 1035am in water 35′ under our keel. There were many boats leaving as we entered the channel. Some the 100’+ motor yachts, 40’+ sailboats, trawlers down to smaller fishing boats. As we looked around the anchorage, we noticed that most of the sailboats were big; mostly 45′ and up; the motor boats started out slightly smaller but went up to over 60′ all anchored! We had anchored between S/V High Tension,probably a 36 footer, and S/V Bare Boat <40' with plenty of room around us, which we would find out later would be some cause for concern when other boats tried to anchor. One other note, this anchorage has fair holding and boats have been known to drag in a good wind, but those kinds of winds weren't predicted for our stay.

We got the dinghy ready and decided to look for the dinghy dock. Great Salt Pond is the name of the anchorage area and is pretty big, so we went down the eastern side and around towards the marinas. None here as it obviously looked private. On our way back, we had trouble with the engine, it ran out of gas even though the tank was full. Phil couldn’t get it started, so changed to the other tank. He finally got that started but we had not put the oars or had our hand held VHF radio in the dinghy so Lorraine was nervous. We went back to Changes to get these and then tackled looking for the dinghy dock from the western mooring field where more of the marinas were. After asking someone on a Block Island boat, we found it in at the the Block Island Boat Basin where the launch goes, which is in the middle of the marinas. Once there, we checked out bike rentals, and decided to hoof it to the Old Harbor where the main stores and restaurants are located about 1.5 miles away. There were many other people walking, riding bike and mopeds which are available for rent closer to Old Harbor.

The houses are unique here in the they are mostly grey cedar shake siding. Here is one that had an unusual design on the side, but most of them are plain. The store Lazy Fish. Many of the stores are in houses instead of buildings that look like stores. 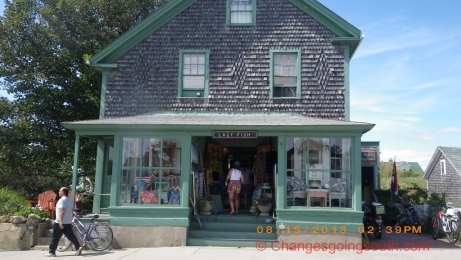 We also stopped in the Block Island Historical Museum in an old home. They had a $5.50 tour of the upstairs available, but we declined.

As this is where people live versus a place they go on vacation like Watch Hill Cove (except for the very wealthy that have homes and guards for their homes), there were grocery, hardware stores and other stores that people need to live in addition to the touristy stores.

Old Harbor is also where the Ferries come. They have the year round Block Island Ferry and the express service, which is seasonal. We had lunch at the Mohegan Cafe, across from the ferry docks and being right next to the front window, had a view of all the action.
Photos of Block Island years ago of swimming, the Jail and the lighthouse. 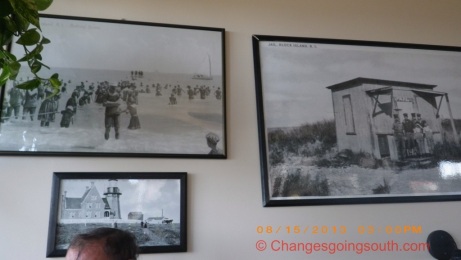 After lunch, we walked around a little more, but took the short way through town to go back. We’ve had enough of touristy places. 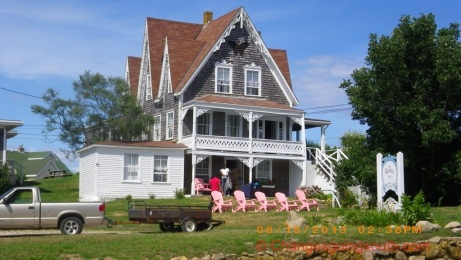 Surf Hotel on the water near Old Harbor.

View of new Harbor on Great Salt Pond. The Orr Restaurant is the brick building on the left.

I was able to buy line, weight, and holder combo for crabbing which I hoped to try tomorrow. We had a beautiful sunset and eating too much at lunch, didn’t have a supper.

The anchorage was calm in the morning, so after breakfast we started on the quest to catch some crabs. Being told that crabs like to be around docks and that it was ok to try off the dinghy dock, that’s where we started. I had some ripe smelling chicken thighs and also the drumsticks to use with the new crabbing lines. I forgot the net, so while Phil was kind enough to go back to get it, I got started. I had LOTS of crabs go on my lines sometimes SIX at a time, but none were blue crabs. They were muddy looking small ones. Maybe our friends in this area would know what they are. Phil got back and we netted some of them and dumped them back in again.

We got into the dinghy and searched out other places to give it a try. We anchored off some rocks, and once again caught small muddy looking crabs. 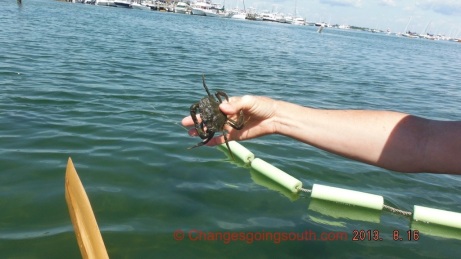 The we had the incident of the end of the new crabbing line coming loose from the oar it was tied too. Phil worked hard to recover it from the bottom. A young local guy jumped into the water to retrieve it just as Phil was able to get it with the oar. I’m lucky they do that for me! Seeing an opportunity, I asked the guy where to go crabbing? He says at the bridge. So we motor around here and there trying to find the bridge with no luck. Later we had a map to look at and being low tide the tidal flats were exposed where we needed to go to get to the bridge. I give up for THIS location. We went to the dinghy dock and to The Orr Restaurant for lunch.

The Orr Restaurant is unique with painted oars on the walls and also hanging from the ceiling in the bar area.

They have a big upper level deck overlooking the harbor. We got the last open table before the lunch rush so didn’t have to wait. I had a nice salad and Phil had burger and fries and beer. I splurged and had a diet pepsi refilled 3 times. This is a splurge because I have just a few diet coke with lime on the boat so took advantage of essentially unlimited refills. After taking our time we went back to the boat to relax.

Being Friday, boats were coming in for the weekend. There were a few boats that tried to anchor semi close to us. One was a C&C 52′ S/V Blue. Anytime you are at anchor, the past time is watching other people anchor first to make sure they aren’t anchoring too close to us and second, just for the enjoyment. You wouldn’t believe how many people yell at each other or don’t put out enough anchor chain/rode (rope) to prevent dragging the anchor. Well S/V Blue let out their anchor chain, but it didn’t look like he was letting out quite enough chain so ended up beside us instead of behind us. I’m watching and the captain knows that I’m watching and looks to me to ask me is this okay. I yelled out “how much do you have down?” (Trying to know whether it’s enough based on the depth here which is about 40′) and he says 99 feet? (Not enough) I tell him how much we have, and he get huffy about it. Cptn High Tension comes over in his dinghy and talks to the Cptn Blue about something and they kind of get into it Cptn Blue yelling a 3:1 scope is plenty. Typical safe scope is 5:1 and up depending on conditions. We keep watching and it turns out that Cptn Blue lets out more anchor chain ending up being behind us instead of beside us which makes us feel much better. As the afternoon goes on there are a couple more bigger boats that try anchoring in the area but Cptn High Tension talks to them and convinces them to not anchor there. There are boats that anchor far in front of us but not anybody else that’s close by.

We have chicken breast and zucchini squash cooked on the grill and left over rice for supper. After another beautiful sunset we go down below for reading or whatever we do in the evening. Lorraine knits a lot.

Tomorrow we planned to go to Long Beach which is known for shelling and anchor close to Shelter Island.