I started out the day washing two loads of clothes while Phil cleaned the side decks and cockpit on Changes. I had my iPad with me and checked the weather, as we often do daily before a passage and it looked like it had changed to be SW on Friday instead of continued E or NE winds, so after the clothes were done, we talked about it and decided to leave as soon as we could. Mike came to send us off and with many thanks, we cast off the dock at 956 am. We raised the Main Sail @ 1014am and the seas were hazy and glassy except for the ever present power boat wake. We reached Bug Lighthouse, changed course and encountered fog at 1043am. Both of us were on watch looking for other boats as we could see the water fornabout 100-150 yds. The fog lifted and we saw peaks of sunlight and became thick again until as we neared Plum Gut Lorraine wearing her sunglasses saw 2 powerboats very close together off our starboard bow It looked like the 2nd boat was being towed, but Phil didn’t see them at first as he wasn’t wearing his sunglasses. It wasn’t until I took off my sunglasses and saw the boats disappear that we realized how important the sunglasses were. Of course Phil them on.

Here is a photo looking of the port side.

This is looking through our “windshield”

By about noon the fog lifted and we saw blue skies only for it to return again as we neared Montauk Point at 2pm on Phil’s watch. I have to say that I was leary about making the turn onto the Atlantic Ocean, but Phil was confident the fog would be blown away and he was right. By 305pm the head sail was out with the engine off @ 315pm. Phil warmed up leftover spaghetti about 530pm and our every 3 hour watch system started with Lorraine @ 6 pm. After supper, we motored sailed at a course of 233 degrees with the wind 6.2 kts at 136 degrees from port. Our boat speed was 5.6 kts, GPS was 5.0 kts. As Lorraine’s watch progressed, the wind continued to die to a low of 3.8 kts so the head sail was rolled up. It was quiet and continued to be hazy at the water but stars were still visible overhead. Lorraine sent OK messages by the SPOT Messenger about every 3 hours if you want to check the Spot Location page in WHERE ARE WE top right. During Phil’s 9p to 12 mid watch the wind slowly built to about 8 kts and started to clock to the NE. At 1225am, Ship Hanjin from San Diego passed 0.5 mile from our stern, which seemed RIGHT BEHIND US to me, but I have a poor sense of distance on the water. By 311am, I turned off the engine as the wind was up to 15.4 kts at 149degrees from port, which was a broad reach. We were maintaining 5.53 kts boat and 6 kts GPS speed. I saw another ship in the distance and there were a few commercial fishing boats out fishing with their super bright lights. Phil took over about 330am and as the night progressed, the wind increased. Wind was 17-18 gusting to 20-21kts and stayed that way the whole watch. Even though we had the lee cloth on the port settee, it became increasingly difficult to sleep by 5am ,so I started my watch a little before 6am. The wind was 19 kts, speed was 6.6 kts boat and 5.8 kts GPS. We had confused waves and I was a little seasick and took Marazine, which helped. Phil had already reefed the jib and I left it that way until I needed to roll it as the wind was too far astern and the jib was flapping a lot. Our speed didn’t decrease as the wind continued to build to the low 20’s. Of course it was worse than had been predicted, but onward we sailed. Phil took over at 9am and jibed as the wind had gone much more NE. I tried to sleep as the waves increased more and we rolled back and forth from the quartering seas. Not fun, but we were getting close to our destination. At 1140am the wind was 23.5kts from 166 degrees from starboard, speed was 6.25kts boat and 6.7kts GPS. For us that’s moving faster then when we motor! About 5 miles out, Phil called and talked to Tow Boat US to make sure it was safe to go in the inlet and get the info about where the deep water was in Oyster Channel through Barnegat Bay. By 1228pm we were in the calmer water behind the channel breakwall and anchored south of Barnegat Lighthouse close to the fishing boats by 1255pm. We dragged the first time so raised and reset the anchor at 115pm. We had gone 164.17 nm by the boat, 161.0nm over ground per the GPS and travel 27 hours. We did some housekeeping and then we both took a nap. It was a long day, but we were glad we were here. Our plan was to wait until 4pm and call Jim Evans from S/V Windsome whom we met in Georgetown, Exumas, Bahamas to make sure the water was high enough so we could make it past the sand bar at the channel entrance into the lagoons and reach the dock at their house.

We raised anchor at 423pm and reached their house on the west side of the bay to be tied up by 555pm. They made a delicious but simple dinner of burgers on the grill and fresh corn on the cob and provided welcomed conversation and hospitality.

We were tired so called it a night early with Lorraine going to sleep at 930pm and Phil going at 10pm.

The lagoon they live on. 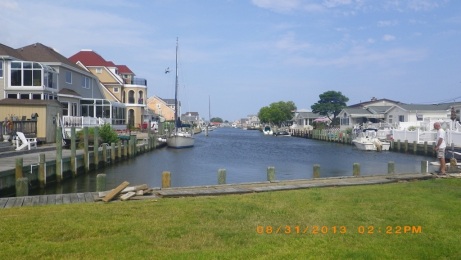