Saturday it turned out was a day we mostly relaxed. We woke at 6am and listened to Chris Parker weather. He thinks the Christmas winds came and went before Thanksgiving this year, and I hope he’s right! We will be here for several days and haven’t started looking for a weather window for our next hop north yet. We missed the Grenada Cruiser’s net as we forgot it started at 730am instead of 8a. Oh well! After a while, I made oatmeal for breakfast. Which reminds me, a small piece of the grate for the right most burner, the one I use the most of course, broke off yesterday. The spot weld failed. It’s going to be awhile before that gets fixed as we have to take out the whole stove and take to a welding shop to get it fixed. Only matters when I use the smallest pan so far.

I knitted my pink sock, then took a nap mid morning. I still didn’t sleep well last night fighting the light from the full moon, the heat and noises. I had forgotten how bright a full moon can be when you are trying to sleep. Eventually I got up and put the piece of fabric partially over the forward hatch to make it darker. Adjusting to sleeping on the boat is not going well. I wish that I was not so much like the princess and the Pea, with everything bothering me. Eventually I will adjust.

We were hailed on the VHF radio this morning by a boat name Changes. They had not heard of another Changes in their travels and wondered where our boat was registered. They are from somewhere in Canada and we hope to meet up with them at the raft up this evening.

Typically when we are going to a cruiser’s event where we are snacking, I fix the main meal at lunch time. I made some pumpkin (tastes like squash), a packet of the black beans and rice I brought with stewed tomatoes added, and a couple hamburgers Phil had bought. We have more beans and rice and pumpkin left over. And fellow Woman Who Sail member talked about a new way, for me, to heat up leftovers! Put about an inch of boiling water in a pan, get a long length of aluminum foil that can be draped over and in the pan above the water. Put your food on the foil and cover with a lid.

Phil washed dishes, then continued reading while I knitted some more. Eventually we thought we need to do something productive, so we searched what was under the V-berth storage and found my extra shampoo and conditioner and was able to find enough room to put the 3 duffle bags I brought my stuff in for long term storage. Wish I had some way to know what I left in the boat when I was packing. E cent for me jeans and maybe a couple shirts, I could have left my cold weather clothes at home.

The main event for the day was the Full Moon dinghy raft up. We left about 530pm and walked to the corner where we met Inga.

We were early, so sat on the curb until she arrived. This area is really hilly and so are the roads. We took a short cut through an old hotel destroyed by Hurricane Ivan. The owner of Secret Harbor also bought this property but doesn’t mind the cruisers walking this way. According to Inga, it really cuts off a lot of distance from talking the streets. This old hotel has a wonderful view of the harbor and a house (mansion) built into the mountains by someone who owned Uniroyal Tires. He has since died and the property sold. 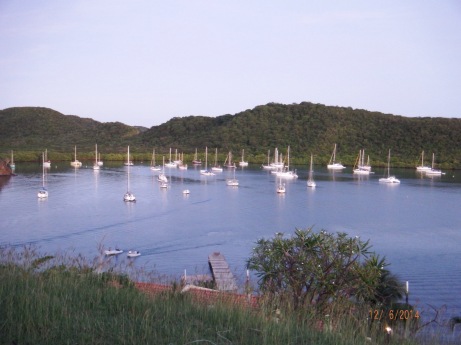 Then we continued on and met Inga’s partner Hal, and their tenants Dan and Sarah.

Into the big dinghy we went and we joined a couple other dinghies already there. Eventually we had16 dinghies rafted up and 18 boats represented and the best weather for it. NO wind so we could just float around and not have to worry about setting out anchors. A couple time Hal started his outboard so we didn’t run into a boat, but that was nothing compared to other times we were told. Everyone brought snacks to pass around and around and around. We did meet Fran and Chris on SV Changes from Toronto Canada. They named theirs after the Jimmy Buffet song “Changes in Paradise”

We also met Diane and Larry and friend Karen in this photo.

They are single handlers each with their own boat that travel together. Larry is also a past “piston head” like Phil so they had LOTS to talk about. Eventually Diane came over closer to me and we had a lot in common. She also had a daughter that died at 25 years who had a genetic disorder. Diane had a rough road for many years but now loves living on her 38′ double ended. I think she’s been cruising for over 10 years.

Finally the raft up ended about 8pm and we started for home. Inga walked us back while the rest rode home with Hal. Good thing she took us back, because everything looked different in the dark. It didn’t take long until we were on the road and gave hugs goodbye. As we were walking, we saw a young woman sitting on a corner, then a car pulled up to her. It wasn’t too long that she was walking behind us. We thought we took a wrong turn as the road didn’t look familiar, so we asked the woman, Chivon, where the marina was. She guided us there and we found out that she walked towards us because she was scared. She had been waiting for the bus and a local in the car wouldn’t leave her alone. We offered to stay with her until the bus came, but she decided to wait for a different bus at home not too far away. She said ladt month a young woman was hit in the head with a hammer (We don’t have any more details) so she was trying to be very careful. We were grateful for her help.

After a while I was hungry, and used the foil over water heat up trick to warm up my leftover burger. Worked like a charm.

This time I went to sleep about 1030pm before Phil after washing down with soap and water and already having the fabric partially cover the hatch. In no time I was asleep.