We woke at 630am and it was raining on and off heavy, so there goes us going into the market. We had made arrangements with Martin of MV Providence for going up the Indian River at 9am this morning. By that time, the rain had stopped. Martin goes with his boat and picked us up along with Vision Quest for the boat tour. First we stopped at the mouth of the river to purchase tickets to enter the national park and then we continued up the river with Martin rowing the boat against the 4 kt current. It is beautiful up there, but because of all the rain from yesterday, the river was muddy so he took us past the the usual stopping point until it was too shallow. The vegetation is interesting and Martin being a Botanist was very knowledgable. We were back to the boat by 11am and had PB & jam sandwiches for lunch.

Park office where we got tickets to enter Indian River. 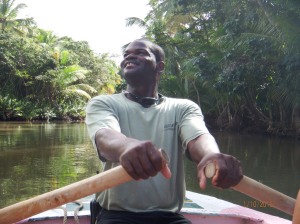 No outboards allowed on the river. Martin rowing against a 4kt current. 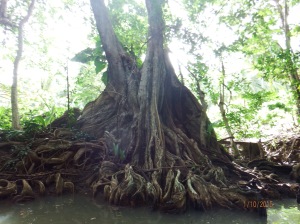 Swamp Blood Tree – cut the tree and sap is red like blood.

There are many crabs that live in the holes along the river.

930am we met Vision Quest and Walkabout at the PALS dinghy dock and walked to Fort Shirley where we walked around the fort and saw the 3 masted Clipper Cruise Ship sail in and dock close by.

Start of our walk to Cabrits National Park 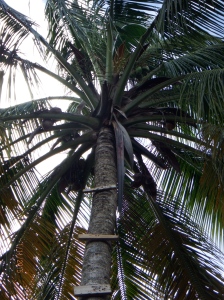 along the way, steps up a palm tree

The road/path up to Fort Shirley

Map of grounds at Fort Shirley.

Panoramic view of the fort cannon and the harbor of Portsmouth, Dominica.

The Clipper Ship that sailed in and docked at the base of Fort Shirley.

This is a sampling of the path we walked up the hill to the Overlook where the cannon was.

They we took the trail up the mountain to the top which had a view of the Atlantic and where an old rusty cannon stood. It was quite the hike, to the rest at the top was very welcomed. After hiking down, we stopped at the Prince Rupert Tavern inside the national park and had lunch. I had a chicken Roti and Phil, Jeanne and Bob had Burgers and fries. Rick and Peggy had the fried fish dinner. On our way back to the dinghies, it started to pour so we ran and took refuge in a closed bar until the rain stopped. Back at the dinghies children were hanging on and playing off of Walkabout’s dinghy and weren’t cooperative in getting off it. We were lucky that we only had an adult ask us for a ride, which we didn’t give. Our dinghy isn’t fun to play off of being wooden. WE arrive back at Changes at 3pm. Phil took a nap and I tried but didn’t succeed in preparation for the Sunday night PALS BBQ which they have to raise funds for boat security. There were many squalls in the afternoon and evening, but we were able to travel to the BBQ in between the squalls. It’s $50EC a person, but the food was good, fried chicken legs or fish, with green salad and another side dish. It turns out this was the first BBQ of the sailing season. I’m glad that they had it as we missed this on our way south. The music and dancing was fun even though the sand was dirty. We also found out that the PAYS office has cold showers for $1EC, but you have to take it during the time the office is open.

Rick and Peggy with Bob and Jeanne in the background.