We did get the errands done; visiting the Post Office, grocery shopping and preparing for leaving the dock. Thank you Carol and Chet for transporting us in your cars. We left the dock at 1108am and 1nm and 20 min later were anchored behind the breakwall.

I made a pasta dish with fresh corn, zucchini, carrots and tomatoes. After eating, we relaxed and looked at the weather forecast which is scattered thunderstorms Thursday and higher winds on Friday. We have a short day so thought that we could get there tomorrow morning between the rain. I worked on the blog and we enjoyed watching the boats go by. There were a couple of men fishing and floating by on the tide. They had caught a small fish and tossed it back in.

Mostly there were power boats and their wakes rocking us, but also sail boats motoring along, some with dinghies towed behind them. We had the rest of the rhubarb shortcake. The clouds were starting to fill in from the west so about 5pm, Lorraine suggested that we leave right now and go to Essex so that we didn’t have to travel in the rain. Phil agreed so we raised anchor at 517pm and motored off. Phil let out the head sail so that we could start to sail after we rounded the end of Menunketesuck Island. The winds had picked up with white caps and 2ft seas and we were heading up wind. We were able to sail for about 10 min until we couldn’t point high enough to clear the next point, so we had to turn on the iron monster. Lorraine was getting seasick, so took over the helm, which helped. About 645pm we entered the Connecticut River that had 2 lighthouses. One at the entrance to the channel.

. And another further up.

. Just south of I-95 there is the Old Lyme Bridge, a RR bridge. The chart wasn’t helpful giving information and no one answered Phil’s request on Ch 9, but it turns out there are numbers lit that show you how many minutes to go before the bridge opens, so we passed through ok. It looks like the bridge is completely automated. In the photo, the orange lights are the numbers. 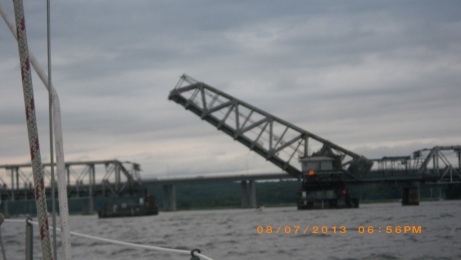 By this time it was about 715pm and as it was cloudy, getting darker. We had contacted Patty when we were about 2.5 nm from the channel, and spoke with her dad who said we would make it before dark, but it was taking us longer than we expected with a negative current all the way. Should we continue to the mooring ball in Hamburg Cove with great protection from the coming weather or anchor across from Essex which is more exposed? Would we be able to see to pick up the mooring ball? We got to Essex at about sunset, and decided to continue on as the iNavX charting software said we’d get there by 810pm. Lorraine is still at the helm as we see the red and green buoys marking the narrow twisty channel into Hamburg Cove. It is definitely getting darker and difficult to see the buoys. We both missed seeing one pair of buoys and we went aground! Phil took over the helm and we managed to wiggle off to head in the right direction. This time Lorraine stood by the mast to look ahead and after 2 more sets of buoys we were in deeper water. Now to find the right buoy. We motored in the direction Patty had talked about, and as the light was fading at 818pm, I spotted RZOLE (part of Orzolek) on a mooring ball and thought that’s it! They had an easy to catch little ball to the loop of line and we were tied up in no time. 5 min later it was too dark to see the markings on the mooring balls. RELIEF! We could tell that it was a beautiful place and very protected as we were told. I texted Patty that we made it and Phil had his cold one (beer). We relaxed outside until the bugs drove us in and we did our typical evening activities. 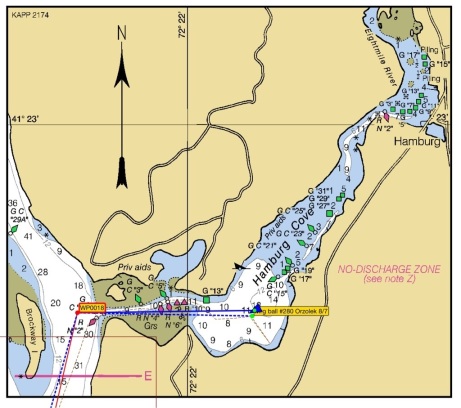 We plan to stay here at least until Saturday and maybe even until Sunday when the good weather returns. We have been traveling a lot, so deserve some rest days. I’ve been told that Essex is a good place to visit about a mile dinghy ride away, which we would like to do.

These are some photos of Hamburg Cove starting from the channel going around the cove to the east.