Our passage to Georgetown, SC was slow as we had the current against us most of the trip going 4.0-4.7kts speed over ground until the GPS speed picked up to over 5kt about 11 am passed Barefoot Landing. It wasn’t until we got to Enterprise Landing that the current was favorable at max 6.6kts. It’s another dreary cloudy day with a little bit of rain that was enough to get the salt off the windows but not enough for most of the boat which had accumulated during our overnight passage. We had looked for possible places to anchor along the way, but decided to press on and anchored at 557pm amongst the many derelict boats either anchored to tied up to mooring balls in Georgetown harbor. It’s really too bad that Georgetown doesn’t do something about these derelict boats, as it makes it less welcoming to visit. Phil mentioned that’s how St. Augustine FL use to look until they changed things. Yes I know that you need to pick up a mooring ball now, but it is much nicer now too. What do you think?

We had left over Crab Primavera over angle hair pasta and green beans for supper. Just after sunset, there were many fish jumping out of the water and there must have been big fish hunting as you saw the surface of the water ruffled from fish scattering. We are lucky that the wind is from the north so there is no paper mill smell, thankfully.

We got an email from Chris Parker saying he didn’t see our request to have his weather services, so reapplied and it went through. We got a new email from Chris saying so and also info on how we can listen to his weather forecast on the internet. We have signed up to sponsor him for a year for SSB and email weather forecasts in the Bahamas and Caribbean. We were impressed with his forecasts last trip to the Bahamas and since we will be gone longer this time, look forward to getting specific info in the area we will be. Since weather is everything determining where and when we move or stay, we want to have the best information we can to stay safe.

Monday was spent in Georgetown. I woke up in a funk just feeling irritable and blah. It’s been gray and dreary, rainy and cool temps for many days. I am READY for some warmer weather and sunshine which I hear is as close as Charleston, SC a day trip away with favorable currents. I know that it’s getting cooler back home, but when you live on a boat, you are in the elements ALL THE TIME and I would appreciate them changing right about now.

I fixed scrambled eggs and toast for breakfast and after Phil washed the dishes we got off the boat, Phil rowing the dinghy to the dinghy dock which we were close to, and walked to the Piggly Wiggly (PW) Grocery Store. I think last time we had walked to the Food Lion and got a ride home but this time we used the iPad and found that the PW was closer. This store wasn’t the smoked meat capital of the world like the Food Lion was but they still had an impressive assortment. They had slices of the country ham which doesn’t need to be refrigerated, but Phil didn’t want to try it. We’ve had a bad experience when we bought a whole dried country ham before and cooking it when the family was together camping at my parents property in Pleasantville, PA. It really had an off taste to it and we don’t want to repeat our experience. The ham slices looked good though.

On the way home we stopped at a Bakery, but not having the Bear Claws Phil was craving, we stopped at an now open (closed on our way to the grocery store) ice cream store to have 2 scoops for lunch. I had a scoop of Chocolate with Brownie bites and Pumpkin and Phil had Butter Pecan his standby. Phil doesn’t waste time experimenting on his ice cream. He’s not taking ANY chances he says on his one ice cream a month like he thinks I take. 🙂

We stopped and took photos of the results of the fire. Here is an article to read from the NY Times. . 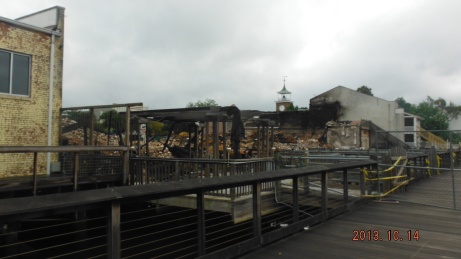 View of the results of Fire in Georgetown, SC historic District

Panoramic photo of fire in Georgetown, SC
from docks to into the harbor area

Then Phil rowed to Changes without much difficulty. We were against the wind and wasn’t sure if we’d have trouble with the current. Getting off the boat was good, as my funky mood had lifted. I spent the afternoon knitting a green sweater then fixed Brats, potatoes and used up the last of the cabbage which is starting to get the worse for wear. We added some left over green beans on the side.

As I was importing photos, it brought back details of our trip on the ICW I want to share

SV Steel Away at Bucksport Marina. I attended women’s tea on board during
St. Mary’s Thanksgiving 2010 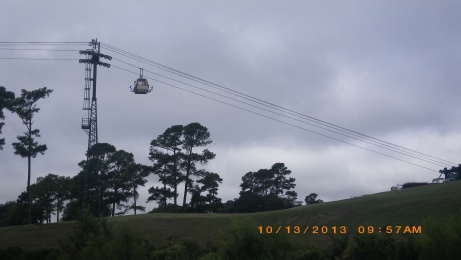 Golf course solution for crossing ICW to get to other Sid to continue golfing around in Myrtle Beach area. 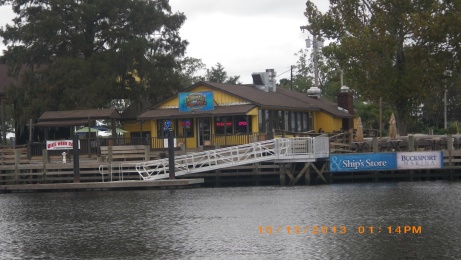 Bucksport Marina was close on our last trip down. Had cruisers potluck and was cold then. Electricity was on, but we didn’t have ourselves. Had to anchor nearby 30′ water on way back north.

Tomorrow we plan to get up early, listen to Chris Parker which we should now be able to hear with a webcast and leave for Charleston. Sunshine here we come!

3 thoughts on “Passage and Stay in Georgetown, SC”