We woke at 6am this morning and prepared for departure. For the first time this trip, Phil added 10 gal of diesel to the fuel tanks then started the engines to see if the alternator belt would squeal. It was fine so off went the engine while we listened to Chris Parker. The weather is still good so it’s a GO to leave immediately. We raised the anchor with the main sail up at 724am. After going through the cut and admiring the Star Clipper cruise Ship, we started turning towards our final course to Bequia.

We saw a ferry come and cross across our bow about a qtr mile away.

After that we had a uneventful motor sail upwind with the wind 13-15 miles apparent and our speed mostly 5-5.5 kts with a period of time being knocked down to 4.7 kts. It was too hot below with the Forehatch closed, so I stayed in the cockpit the entire time. By noon we lowered the Mainsail and were anchored by 1221pm. The fishing boat that was aground when we had come down in the spring was still there.

First order of business once everything was put away, was to put the outboard on and go into town for lunch. Phil had a hankering for a hamburger and I certainly wasn’t going to say no to lunch out. We walked along the sidewalk right along the edge of the water to the Gingerbread Restaurant and hotel. We got regular Cokes and ordered the local fish dish and a hamburger. But guess what? They didn’t have any so we paid for the drinks and went walking until we came to the Whalebone Bar and Restaurant. They have whale vertebra segments as part of the bar stools and a rib bone hanging horizontally along the bar. 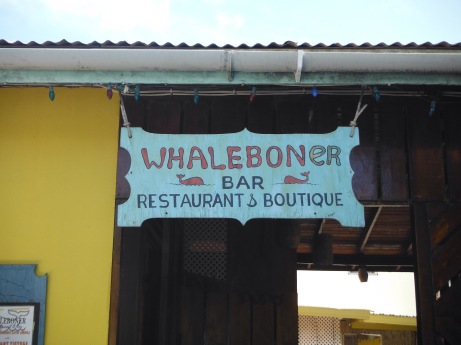 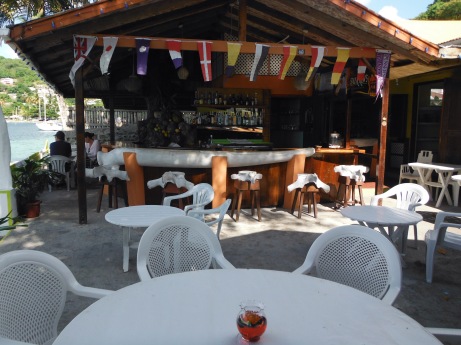 Phil got his hamburger and fries with a Guinness Stout and I got the Chicken Roti which was very good. After eating we went to the dinghy and rode further up to the town dock. There are many dinghy docks in this area. We walked to Knights Trading & hardware for groceries then got cabbage at a fruit and veggie stand on the way back. Asha the seller, gave us a sample of a sweet potato, and then gave us the whole one to try in hopes we’d be back to buy more.

Back at the town dock who should we meet but Francoise and Michel from SV Grands-pas1 whom we met in Warderick Wells, Bahamas on our first trip. Francoise recognized us first and double kisses on the cheeks as is the European way and hugs went around. They had summered their boat in Grenada and were heading back north. They are out of fuel, water and food so they are getting all three here before continuing on in a few days. Maybe we’ll see them again.

We were back to the boat by 340p with the groceries were put away when Ginny Harmon, a fellow WWS’r anchored behind Vision Quest drove up and gave us 2 – 1# steaks from the 40# sailfish her husband caught yesterday just as they rounded the point coming into the harbor. She said they taste better marinating in milk, so I added milk to the ziploc bag and put them in the fridge while going on the Internet to look for recipes. Vision Quest also got a couple steaks and Ginny’s freezer is full.

We were so filled up from lunch, that we had cheese and crackers and canned peaches instead of cooking. It was mostly dark in the anchorage until the Star Clipper Cruise Ship arrived and lit up the anchorage with the lights strung between their 4 masts and other deck lights. The first photo is lit up and then next as we passed by on our way out of the harbor.

Phil and I read and did Internet stuff until we went to bed to loud music playing. I put in ear plugs which helped until they fell out ( I have short ear canals) woke and put them in again. Finally the music stopped about 230am.

4 thoughts on “Passage to Bequia”