We were off to the Tobago Cays this morning. We only had about five miles to go so we took our time. We had breakfast and listened to Chris Parker’s weather. We left about 8:40AM with the mainsail up. We motored around the end of the reef at Clifton and set a course of 45degrees to the entrance to the anchorage behind the reef at the Tobago Cays. We motor sailed with a wind angle of only 10 to 20 degrees. We were only doing 5 knots or less for the short trip. Once in the anchorage we spotted Vision Quest and anchored next to them. We were protected by a reef and looking east it is just water. This type of anchorage is my first experience with being protected from the waves by a reef. It is a strange experience. We were anchored at 9:42am.

We put the motor on the dingy, got our snorkel gear in the dinghy and went and asked Rick on Vision Quest where to go. We went to the beach he pointed out, but it had a bad swell making it difficult to get the dinghy up on the beach. We messed around until I planted an anchor on the beach and we let the wind keep the dingy off the beach out of the surf on the beach. We put on our gear and jumped in the water. The snorkeling was not good as the water was murky. I swam into deeper and clearer water and saw a turtle and a ray. To get back to the dingy was hard work as it was against the current. Lorraine didn’t go nearly as far and a good thing. I would have had to get her with the dinghy as she isn’t a strong swimmer. She was waiting for me in the dinghy when I got back.

After lunch we joined Rick for a walk to the top of Petit Beaiou, a small island not too far away. We landed the dinghies on the beach and walked up a steep and rocky path to the top. Very beautiful view of the anchored boats, the reef the blue water, and the small islands below us. 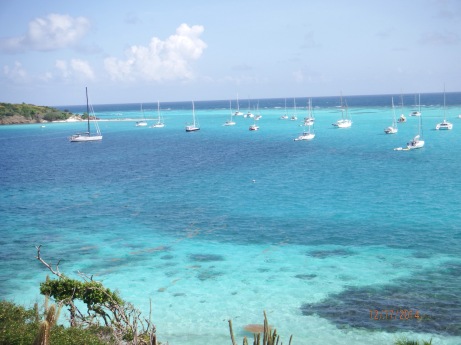 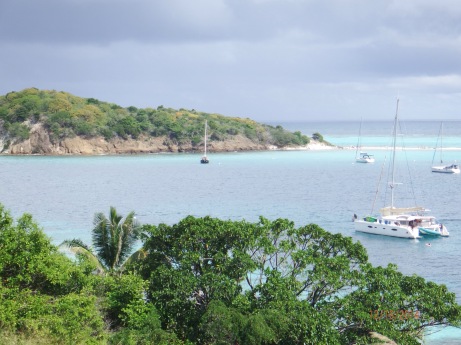 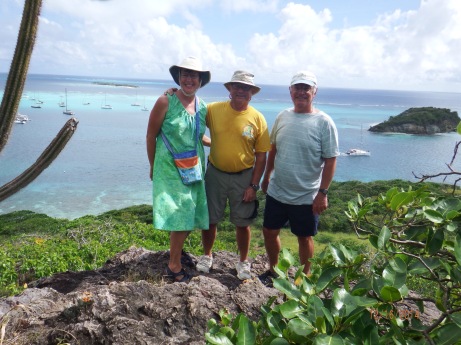 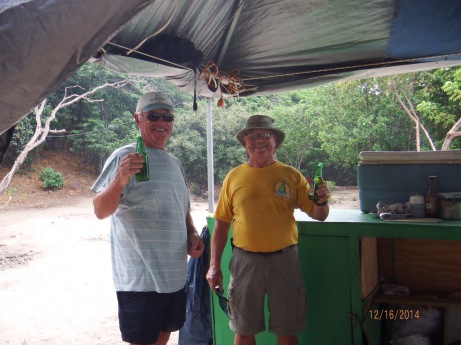 Once down to the beach we asked some ladies for a cold drink and they sent us down the beach to a path that lead to the other side of the island. What a surprise! The place was filled with people off a Star Clipper cruise ship anchored in deep water off the beach. We walked through the party to find a set of food venders that had the cool beer we were after. We wandered around drinking and saw they were shutting down the buffet lunch. The natives were all over this as they were throwing away the leftover food so if you had a plate you could have all you wanted. We not having plates could not do much. We went back to the dinghies and back to the boats. Around 2:45PM we went over to Vision Quest to play dominoes. Rick and Judy were great hosts and we had fun in spite of me being last in both games we played. Back on Changes we had left over lobster in a pasta sauce with spinach mix. We read then went to bed.