About 8am, Mike, Jean, Sally and Andy came over on their dinghy in the way in to town for breakfast and invited us. Phil’s initial comment was no, but it sounded good to me so we quickly got dressed, locked up the boat and arrived at the dinghy dock which didn’t have many dinghies being a Sunday morning. We walked down the street and soon enough we came up to them. Phil used his loud voice and got Mike’s attention. We passed by the fish market, saw a nice Mahi Mahi and each couple got 1kg which equals 2.2 pounds for 10€ (euros). This was too good a deal to pass up.

We walked around some more and finally came up to a snack bar that sold croissants and baguettes. It was next to an ATM machine so was convenient. They had free wifi and after a few false starts, we got connected. Phil and I had to leave as at 10 am, as we were going on a 3mi hike one way to a beach that had food stands in the area.

10am Bob, Jeanne, and Rick were on their way over and we followed in our dinghy to Creole Restaurants dinghy dock. Along the way we passed pre teens paddling in outrigger kayaks having lessons. We got off the floating docks near high tide and had to time jumping off the dock onto the beach just at the right time to minimize getting your feet wet. Unfortunately, Phil misjudged and jumped into the water not when it was receding, but as the wave was going onto the beach getting both feet wet including tennis shoes and socks. I took off my shoes and socks and still got my feet wet.

We had a nice walk over over a few hills and valleys that weren’t too steep. We passed the Gay Beach (for gay guys) and saw a couple nude eye candy guys. Then we walked over the path at the base of the point and not much further on arrived at Grand Anse Beach which we could tell from all the cars parked very closely together. There are many restaurants and shops along the narrow road and families playing on the beach and in the water. By this time our feet were tired so we found a restaurant that had tables and chairs under beach umbrellas in the shade and waited to get cokes and beer. Finally the guys went up to buy the food at the counter. Phil commented how the women serving at the counter wasn’t very friendly. While we were there, some very friendly cats came to be petted and then laid down by my bag. There was a women walking up and down the beach carrying many swimsuits for women foe sale and a man was doing the same selling men’s swim trunks. Then when the bell rang, it signaled that someone was selling fresh coconut ice cream out of a bucket inside a wooden bucket. Bob bought from one vendor and I got from another vendor as we were leaving. Yum! And cold. I got a couple brain freezes. 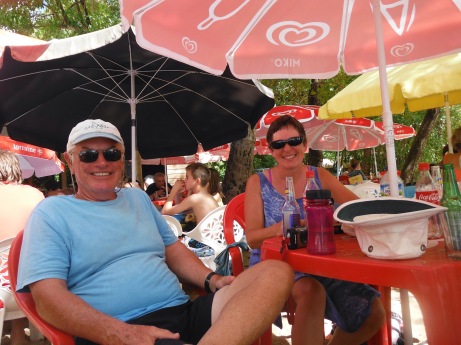 One of the main attractions for the guys was the topless women. They were sure to pick them out and sneak photos when they could. I enjoyed looking at men that had flat stomachs, which before now we’re in short supply. ☺️After sitting for a while, we walked to a different restaurant in hope of getting burgers. No burgers, but they had ribs with Frites (french fries) and chicken with frites for 12€ each and they had diet coke. Sold! We sat under a covered pavilion enjoying the increased breeze in this location. Rick, Bob and Jeanne didn’t find burgers at other restaurants so came back a joined us for lunch. Then we walked along the beach, which felt 10 degrees hotter in the sun vs shade, for a while. Next was to find the bathrooms. They do have them here right? Well yes they do have them, but they are the dirtiest, grossest bathrooms I have ever come across. 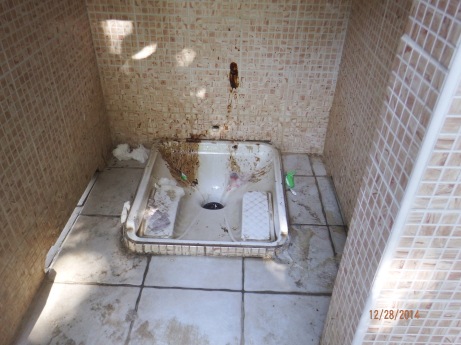 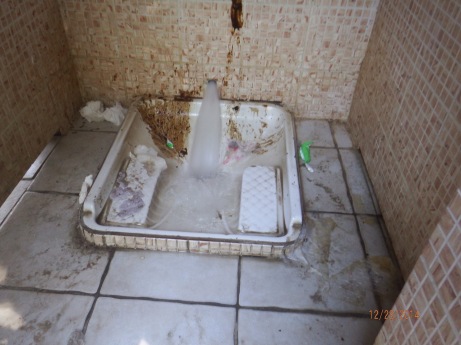 The sign is a misnomer. Yes that is feces. 😝 You have to squat with your feet in the proper position. On the back of the door is a horizontal handle to hold on to. After you are done, then you flush and jump back to avoid getting water on you. Good thing there is a shower behind the bathrooms so we could wash off our legs. At least there was toilet paper which there isn’t always. We really had a nice day! Here are some photos of what we saw today. 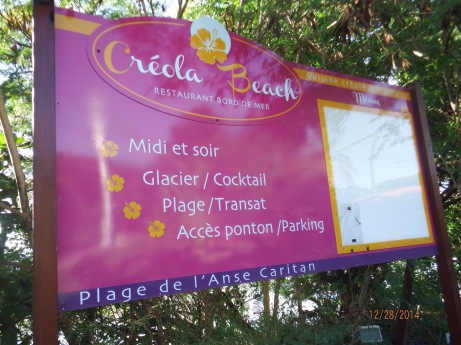 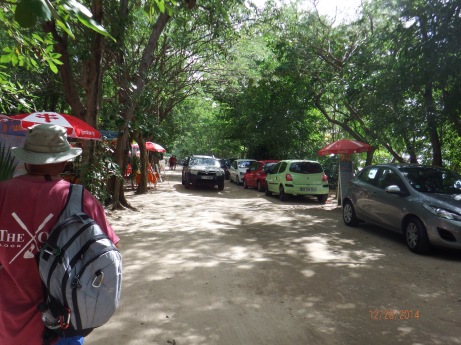 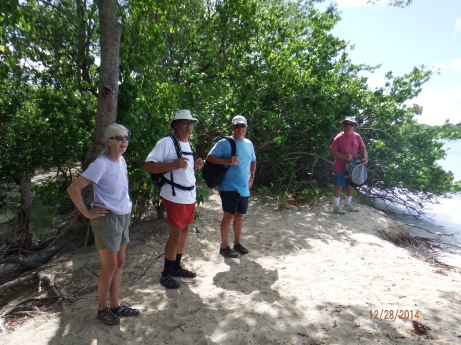 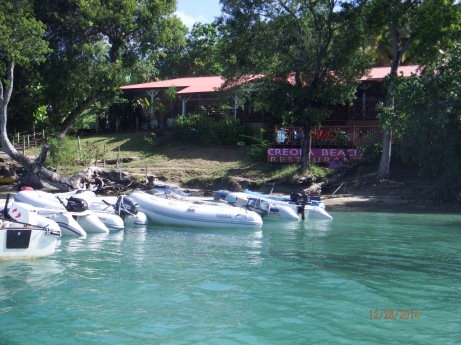 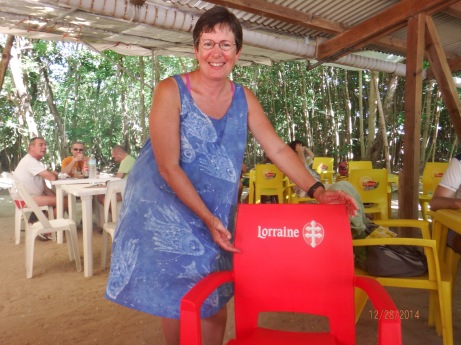 Once back at the boat, we got invited to go to a dance as a festival is going on this weekend. We initially accepted, but called back to cancel. We were just too tired and our feet were sore from the 6+ mile hike. I cooked the horizontal sliced turkey leg medallions with carrots and pumpkin for supper in the pressure cooker. After Phil washed dishes, we each worked getting the blog up to date. Vacation time is over.

Tomorrow we are going on an Island tour with Bob, Jeanne, Rick and Peggy with the best English speaking tour guide Rick says. We leave at 8am and expect to be gone most of the day. We’ve been here just since yesterday, but it feels like we’ve been here longer. Tomorrow we’re suppose to have high winds and Chris Parker returns so we’ll listen before the tour.

I am really bummed that I have lost 10 days of photos and can’t figure out why the SD drive lost the data. Any thoughts anyone? I had them 2 days ago and can’t think what would have disrupted the data.