We left Virgin Gorda 731am after Phil had to tighten the Alternator belt from squealing.  We quickly let out the head sail and started towards the channel with the Star Clipper Cruise Ship leaving also towards the same channel  then we had a charter cat motoring and out running the clipper ship.  At first, Phil was trying to outrun the cruise ship too!! but then he powered back and we went behind.  We probably  could have made it through ok, but I was relieved when he decided to slow down.    We initially had the Baberhaul on the jib, but quickly after exiting the harbor we had to remove it to jibe.  Then at 831am we turned off the engine and was sailing initially at 3-10 kts with Gust to 16, then it steadied down to 6-8 kits with gusts to 15 kts.  by 9am we started the enging getting close to the baths so we could roll in the Head sail and pick up a mooring ball by 914am with 27ft water under the keel.   We traveled 8.3nm to the Baths.  Quickly (well as quickly as I can which I have to admit is NOT as fast as Phil would like, I got in my bathing suit and got a life jacket as it’s quite a distance for me being a weak swimmer to go from where we tie the dinghy to the lines on buoys to where you swim into the beach.   Phil was here years ago in 1987 with the consulting group who did a job for Taylor Instruments hired by Combustion Engineering, but this didn’t look familiar to him.  There were many people coming into the beach as a charter boat had more than 20 people with yellow plastic life jackets on.

We took the trail to Devils Bay and the Beach which turns out to be the area that they landed on the beach in 1987.  We had a great time and got cooled off swimming from the dinghy, and the life jacket worked perfectly for me.  Here are some photos. 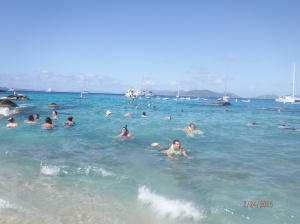 Swimming in from the dinghies. 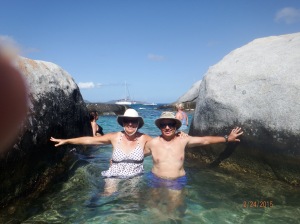 Lorraine and Phil in the Baths

in the trough of the swell coming in. 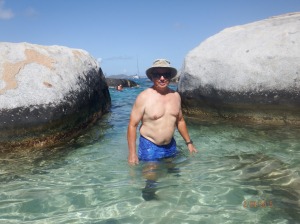 Phil in the Baths

Inside the Caves – it was really crowded! 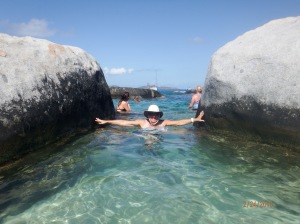 at the top of the Swell.

After the Baths, Sun Showers and lunch,  we released the mooring ball at 1143am and rolled out the head sail motor sailing to Great harbor, Peter Island as the wind was too light to sail.  There we picked up a mooring ball joining Vision Quest and Walkabout.  We looked for SV Dover Mist friends we met in South Side Marina in the Turks and Caicos, but didn’t seem them.    This is one location where there is no WiFi from the Bad Boy as the only one available is locked.

Lorraine and the Baths