Today we rented a car from Hertz.  they met us at the Marina Offfice and drove us a few miles to their base where we picked up the car, a Kia.  It had good A/C which was very much appreciate since we don’t have it on the boat.  We had wanted to see Ponce on our way south so thought after picking up the propane we would go there.  First we went to the Marine Store in Salinas to get the topping lift fixed.  They had the cable and suppplies but said that Phil needed to make it using their equipment for liability reason.  No problem!  Less than 30 min later we had a new topping lift at a very reasonable cost and was able to let Bob know that they also had the cable he was looking for for his project. 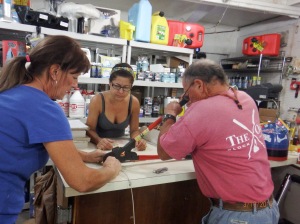 close up of Crimping Topping Lift. 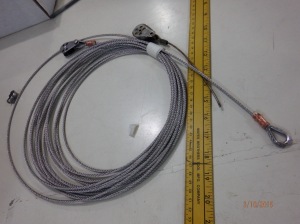 Now we went to Ponce.  While at the marina yesterday, Will on a 42ft Westsail told me about he maps.me app that lets you download the street maps of countries and States, so I was prepared with this information on my iPad that I brought with us.  We found that it’s not updated with the latest roads, but worked for us.  We weren’t sure where the historic district was, so tried down by the waterfront.  We found that this is mostly a residential district.  Looking at the map we found what we thought may actually be the historic district and was right.  Lucky for us we found a metered parking spot close within walking distance to the square so took it.  We walked to the square and found the tourist information area next to the old red and black fire station.  We wanted to eat at a local restaurant, and was directed to one a couple blocks away.  La Parrilla is cafeteria like with spare interior – just plain tables and chairs in a very open area.  They serve food cafeteria style – it’s precooked behind glass and you tell them what you want from the few selections and pay at the end.  I It was about $6 each then added for drinks.  The food was good, but was a different vegetable which had an unusual texture and taste.

La Parilla – local restaurant where we had lunch.

More food at the restaurant in Ponce, PR 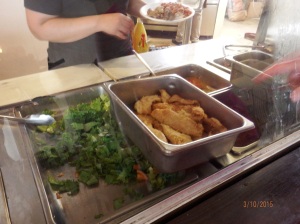 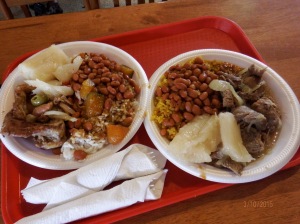 Chicken for Phil, Pork for Lorraine with Puerto Rican beans and rice with strange vegetable.

Afterwards we went back to the fire station to purchase tickets for a trolley tour of the Ponce historic district for $2 each. The driver did the best he could with English translation which was very adequate.  We enjoyed the tour and thought the price was about right.

Phil and painted Lions in the Square historic district of Ponce, PR

Lorraine in Lions in main Square of Ponce, PR 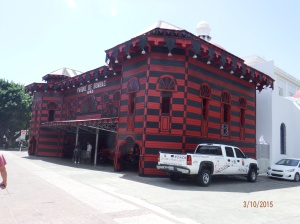 These are home that the firemen were given and handed down to their families through the generations. 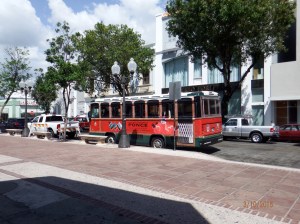 Trolly in Ponce, PR gives tours of Historic District for $2 per person

This is the thousand year old tree in Ponce, PR – 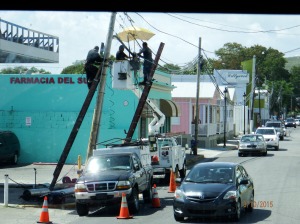 Linemen working – love the umbrella to shade them from the sun. For our friends at home.

We also toured a historic Museum of Ponce which we enjoyed.  Then went to the market district we saw from the bus.  Phil purchased some croc knockoffs since we still haven’t found his other sandel.  Tired, we came back to the car and started our next errand – grocery shopping.  We stopped at the Walmat Supserstore the first exit west of Salinas.  There we bought many pounds of Pork, roast beef, ground beef and boneless chicken thighs for me to pressure can tomorrow along with other provisions.  This is the most inexpensive meat we have found yet on this trip north and coming into the DR and Bahamas, we know that meat isn’t as available.  There is nothing like being in the US for getting provisions!!  The next best place is St. Martin overall and Martinique for their wine and cheeses.