I am sorry that I’m so far behind with keeping up with the blog. Phil and I have been very busy with the canvas and dinghy projects and the an overnight trip to Barnegat Bay. I received my USB cord that was suppose to work with my camera connection kit, which doesn’t so now waiting for a new camera connection kit to arrive hopefully today from our mail forwarding service. So I will talk about our week, and hope to be able to do better on specific interesting days a little later, as today we are to go to the pier at the Jersey Shore and expect I won’t have a lot of time to do much more. Thank you for continuing to check back.

I started working on putting up the side window pattern I made in the waning light last fall to see how close it works and adjust as needed. I also spent a lot of time watching the Sailrite Full Enclosure DVD’s that I had purchased and realized that I didn’t have the correct pressure foot to be able to sew close to the zipper teeth on the left side, though I had the pressure foot to,sew close to the right side of the zipper feet, which doesn’t work as that would mean I have to have all the canvas rolled up in the throat of the sewing machine. I order one and a few other items while I’m paying the $58 overnight shipping fee, even though it won’t get here until Friday at Noon because I ordered too late to come tomorrow.

Phil continues to work on the dinghy painting the seats bright red, but a good red color and applies his 2nd coat of Sickens varnish. 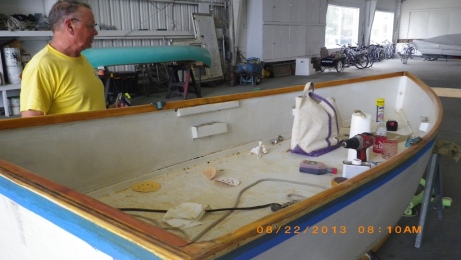 The highlight of the day after a real hot shower in a warm place is Mike and his wife, Pam, taking us out to dinner to A Lure, which as you might guess correctly, is a seafood store. It was really nice to meet Pam and get to know them both more. The food was excellent and we had a table next to the window to see the bay. Thank you Mike and Pam for a wonderful evening! I had a fluke fish and have a before and after photo to add later.

Phil made French Toast for breakfast, as my bread as stale, with sausage. What a treat!

Phil put another coat of varnish on the bright work and another coat of paint on the seats. He had removed the line used to protect the wood on the upper edge and is soaking it in a bucket of water with soap. I worked on the blog and just before it started to rain, hung up the plastic patterns for the side window to see how they worked, which was good. I’m looking forward to these side panels being done.

After the rain stopped about 130pm, a family of swans came down our finger of the marina [3 adults and 4 signets (the babies which were half as big as the adults)] swimming around and behaving in a way I’ve never seen before. It was very interesting as the adults were making a lot of noise, and one had an aggressive posture, head down, wings arched up, paddling as fast as he could and was chasing after the other one.

I did get some video, that if I can get my uploading to iPad fixed, will post to my You Tube account under memryqlts. I’m assuming the aggressor was a male either protecting his territory or trying to keep the female under his control, because the other one was always paddling away, but not fast enough and had their wings arched up too.

430pm after getting keys to a truck from Mike, we drove to Preston Chandlery in downtown Greenport to get some SS screws and hope they had the snap pieces so we could snap a 2nd layer in the same place. Sailright calls it a gypsy stud. They didn’t have one but would order it for us. I also found a paperback book “The Compleat Crabbing” book. Maybe if I read more I can catch some crabs.

I fixed Cajun Chicken Pasta for supper and convinced Phil (long suffering on this topic) to come crabbing at night. You shine a light in the water, the crabs are supposed to be mesmerized by the light and come to the light ready to be scooped into the net. We went to a park with a bulkhead as recommended by the gentleman at the chandlery a short drive away. I shine a light in the water at the floating dock- nothing. We try a different place, still nothing. Lets try on the bulkhead, well we see a few crab after a while, but they are the small muddy looking crab. They do come very slowly closer to the light. We practice netting them and put them back in the water. The tide is rising, so that’s good. We see a little blue crab too small to net. Them we finally see a bigger blue crab and net him. Boy that one is 3 1/4″ long (has to be 5″ to keep) and has tangled himself in the net so bad that it takes both our efforts to get him off. Finally we toss him back into the water and that’s it for the night. Phil is done! 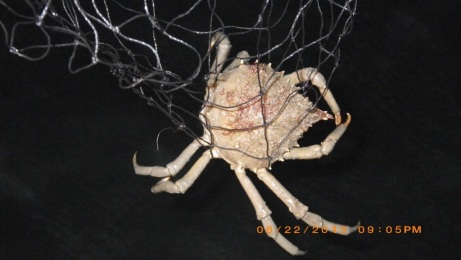 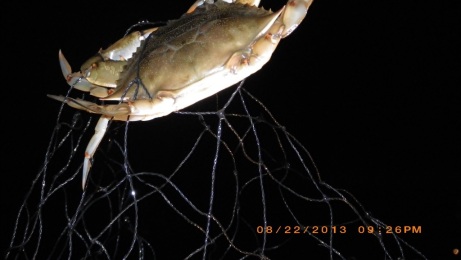 Lorraine spent the morning watching the full enclosure DVD and then remembered that she needed to put down the tape on the boat to hold the pattern in place. Also need to sew the zippers on the go between and the edges of the dodger before can finalize the pattern for zipper placement on the side panel. At Noon, Phil gets my package with the needed pressure foot. The afternoon is spent getting supplies up to the 2nd floor makeshift sewing room and working on sewing the zippers to the gobetween and dodger.

Phil puts on the 4th coat of varnish on the dinghy. I’m sure he was doing other projects, but as he’s sleeping and I can’t remember, they go unmentioned.

We go to Billy’s on the Bay for happy hour so I can use up my drink token and we have chowder.
Later still we have leftover Cajun chicken pasta and fresh Brussel sprouts.

This is the day that I make a lot of progress on the side panel project. I apply the tape to the side of the combing and tubes and complete making the patterns. I cut out the window material, apply the vinyl 4″ binding folded in half and apply the zippers to the top and front edge. They fit on perfectly. Now to work on making the smile window on the dodger and on the port side window for the door.

Phil put the hardware back on the dinghy and applied the rope edging which has shrunk a little after the washing, but Phil stretches it on. It’s looking good! Now to flip it to apply bottom paint. Mike said that he can use leftover paint in a small dock box.

I made chicken legs, potatoes, caprese salad and beans and carrots for supper. We relax for the evening watching shows on Netflix taking advantage of the pretty good Wifi signal.

This time I made pancakes from scratch and they are the best pancakes we’ve had in a while. It’s amazing using fresh baking powder that hasn’t gone bad. I keep it in a Lock n Lock container as I have found that moisture, plenty of that living on the water, makes it go bad. I take it out of the container, use it and put it immediately back in. We also ate up the last of the sausage.

I put the smile window on the dodger after watching the DVD on how to do it. So that took most of the morning. It rained so used the side windows. They definitely help. As I saw Phil unzip the side panel to leave, I thought it I had the zippers both open from the front, I wouldn’t need to put on smile zipper doors. My next step was to rip out the zippers on the go between and the corresponding part of the side window, turn them around and re-stitch. This took up a few hours. Then I tried them on and the port side zipper is too far aft so the window zipper doesn’t reach the dodger zipper. So I rip the zipper on the Sunbrella go between, restitch and it fits! But then I realize that I didn’t turn around the starboard zipper so re- ripped and restitch that too. Now I’m happy and we have doors now on both sides. I really didn’t want to do that last rip and restitch, but know that if I didn’t, I would always regret not doing it. This is why I don’t really like these canvas projects. I have to learn how to do it as I’m doing it, the material is stiff and I don’t do them be ought to get comfortable. But it’s much cheaper doing it myself and I am learning.

Phil but on two coats of dark red Interlux Micron Extra bottom paint on the dinghy, which has never had bottom paint before. Tired, we relax for the night.

That’s it for now. Thanks for checking in. Today is Saturday, August 31. Time for a real shower while Phil sleeps in. We will be going to the boardwalk area that had the roller coaster in the ocean after Hurricane Sandy.