We’ve been gone for 2 months. It’s hard to believe. Today our goal is to get to Middle River as close to where our Niece, Heather, lives to spend a few days. We raised anchor at 731am knowing that we would be fighting the current all the way down, but there was nothing we could do about it. The best we could hope for is to be at slack ebb at some point. We exited the Boehming River using the iron monster at 843 am with our speed 6.13 boat but 4.9kt GPS. Our GPS speed got lower and at times up to a speedy 5.3 (Not) for a brief second as we were entering the Middle River Channel.

Along the way we passed a Mobile Home Park on a hill that was steep enough that even the homes at the top of the hill had a view of the bay. This is only a portion of the homes. 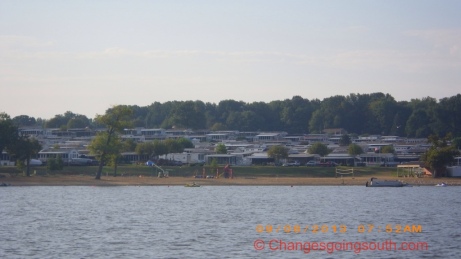 Then we passed Turkey Point lighthouse at 830am. 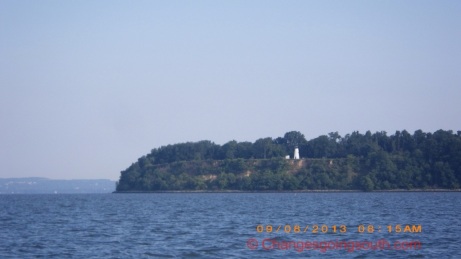 Then I fixed breakfast cooking an egg in the center cut out portion of a slice of bread. It worked really great to keep the yoke runny and toasting the bread at the same time. Then I took watch and along the way made some calls to figure out where we could put the dinghy while visiting Heather. A good prospect was Middle River Yacht Club on Hopkins Creek but no answer despite multiple calls, but it’s Sunday. I did reach Stansbury Marina which is very close to where we want to anchor so maybe that will work. We will explore further when there and can call or dinghy over.

By 1151am we turned the corner and Phil let out the head sail with winds at 7-8knots which lasted a whole 5 min quickly decreasing to 4.9-5kts at 130degrees from the south. We had to start the engine again at 1219pm. Bummer! We entered the Middle River Channel with lots of power and sailboats in the area so you can imagine how choppy the water was with all the different wakes comes at all directions. We anchored in Hopkins Crk with 3-4 ft water under our keel, had lunch and then put the engine on the dinghy to go exploring.

First we went to Stansbury Marina arriving 15 min before closing. We could dock the dinghy there and lift it up on the personal water craft lift for $5, which we paid. Then we went to explore Wilson Point Park, which looks like a place that could work if Heather parked on the street. Then we explored some more and tracked down Middle River Yacht Club after getting some directions from a kind gentleman on a dock. We tied up on their floating dinghy docks and spoke with Dave Justice who happened to be on their back covered deck and is the Pier Master. He asked if we belong to a yacht club-yes in Ohio- great! We could dock there for $10/day, how many days do we want? 3? Sure and they will leave the door to the bathroom unlocked. GREAT. Showers! Phil paid the $30 and we left. We raised anchor at 348pm and was docked by 4pm. After checking Apple Maps, it turns out we are only 1.5 mi from Heather and the same from the local Food Lion for groceries. A few text messages and we’re set for her coming over for dinner. We are next to two restaurants which are a little loud from a band, but it will quiet down after 8pm and we’re sure that Mon and Tues will be quiet if it’s anything like at GRYC.

Heather came over for supper at about 6pm. She looks good! I made a new recipe Lemon Crab Spaghetti, which did not turn out well. It was too dry and not enough flavor. Oh we’ll, we have plenty left over for me to doctor up. Do hear Phil’s groan? I think if I had used half the pasta, it would have been better. We had a nice visit and will be seeing Heather Monday afternoon for haircuts and grocery shopping, then Tuesday will go out for a sail. We haven’t decided what to do regarding Wednesday yet. We’re just happy to be here so close to Heather! I forgot to take a picture of Heather so will get one today (Monday).

Here is a photo of an old skip jack boat close to Wilson Point Park. Hope that someone fixes it up before it’s beyond repair.

It’s very common to see the seagulls and cormorants on the buoys.

. There are many houses with docks close together here but I hear that catching blue crabs is much better 25 mi south of here.