606am we start the engine, but the snubber hooked on the chain twice, once in the top part and again in the bottom slot and it was something for Phil to get unhooked. Finally at 615am we raised anchor the 2nd boat to leave. At 645am on the Atlantic Ocean we let out the head sail and turned off the engine the wind 10kts with gusts to 12 from WNW. We jib sailed until 1020am when the wind died to 5.3kts and we started the engine again. I did use my new trolling rod and had out the hand line when we were outside the 3mi limit, but not even a nibble. The further south we got the more the wind clocked until it was 10kt on the nose, but the waves hadn’t built yet so it wasn’t a problem. Good thing we left early. We entered Cape May inlet and were anchored by 127pm close to the Coast Guard Station and in front of the Seamanship Training Center. The inlet was much longer than I remember from last time, but we entered at 530am that last time due to bad weather. We were lucky then that it was a big good inlet! It’s sunny and we traveled 40.05nm boat log and 39.2 over ground, showing a slight negative current. We take the dinghy off the foredeck, first time since in Greenport, NY.

We are close enough to the channel in this area that we are really rocked by the power boat wakes from the charter ships going out with tourists for whale & dolphin sightings or fishing charters or from the powerboats (many Vikings) for fishing.

Phil and I fix pork tenderloin on the grill, summer squash and potatoes. Gradually as sunset draws near, the traffic slows down and the anchorage is once again calm. Shortly after, a singlehanded sailboat anchored close to us. He was closer to shore than what we thought was safe based on us arriving at low tide and seeing the exposed rocks. After discussions between Phil and I about whether to say anything (I wanted him to say something and Phil felt it was his business, but I would want someone to tell us of a danger we may not be aware of due to lack of local knowledge) Phil yelled to him about the danger and the man decided to move. At the time the winds were <2 knots and there wasn't any danger, but shortly after he reanchored further away the winds quickly increased to 12-15kts out of the north coming in like gang busters swinging the boats so the sterns were facing shore. In the captains favor, he had moved seeing a sign about not mooring in the area from where he first anchored, not realizing that there were multiple signs along the anchorage. I don't know about him, but I was very glad that he moved when he did! BTW, the stronger winds didn't last all night.

Today we decided to take a trip into town while we had nice weather. We put the engine on the dinghy and rode in ultimately to South Jersey Marina where they were kind enough to let us dock the dinghy in an empty slip no charge. We walked the 2 miles into town on Layafette St, which is the main thoroughfare until we turned left onto Franklin St and came up the the Old Franklin Street school. The front part is where the black children went to school and the white boys were in the back part with NO door connecting. 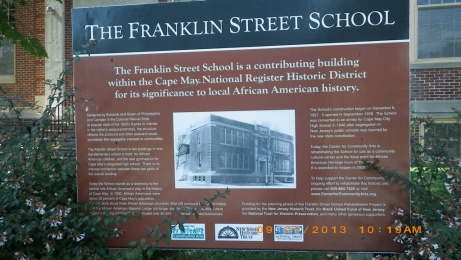 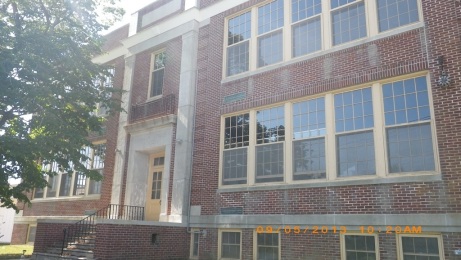 The houses here are generally in good repair or being renovated. 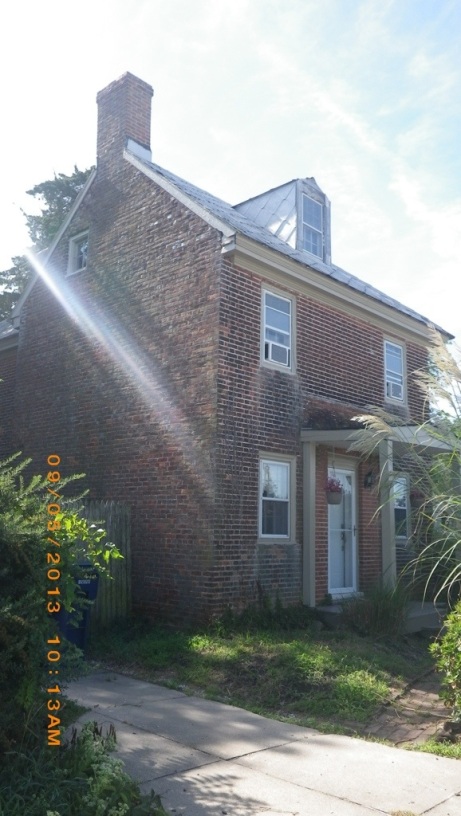 At the end of Franklin St. We came to Washington St with the fire station on the corner and a little firehouse museum.

It wasn’t too much further until we came to The Washington Street Mall which is open year round but something we didn’t go to last visit as we had only gone to the grocery store.

It was great to walk around and go in some of the shops. There are bikes, bicycle powered 2-6 person surreys to rent and carriage rides to view the sites.

At the end we turned left and walked to the beach admiring the houses along the way. One had tile for the railing on the porches.

A little further away.

Then we came to the beach.

Phil said they rent these cabanas for $75a day! 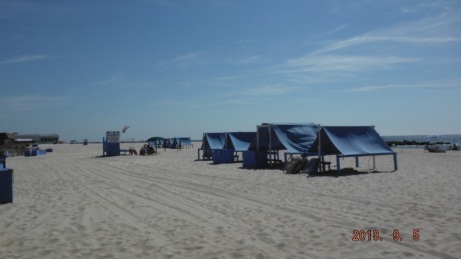 We continued walking down the raised sidewalk and saw the backs of the houses. Many houses are for rent or have rooms for rent for the summer tourists. They are old, three stories, and deep.

These are a row of the house when we walked back to the Mall area.

I like the color of this one. Not sure if this is a store or what but many of the stores here like in Connecticut, are in the old homes. 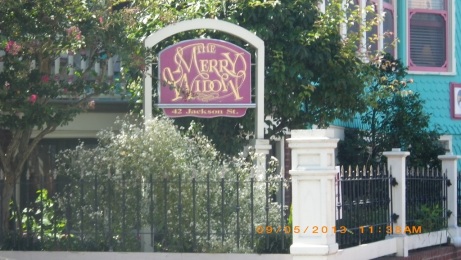 We went to Uncle Bill’s Pancake House for lunch. The side of the building facing the beach is curved so you get an unobstructed view of the water especially in the outer seating area close to the windows.

The tiled floor at the entrance.

Refreshed from lunch, we started on our way back stopping at the grocery store before continuing on Washington St back and recognized the houses and buildings that we saw last time. By this time our feet were getting tired so we were glad to come up to where we parked the dinghy. Our adventure wasn’t done yet. We needed to buy a macerator pump as the bolts holding it together broke on the old one. I knew there was a reason for increased head odor. We dinghied over to Canyon Club Marina and Condos who had the pump in stock for less than Defender and West Marine! They ship parts so we took their card and we were able to get the password for the wifi which is the strongest signal in the anchorage! I’m a happy camper! Then we went to Utsch’s Marine to get the gas for our outboard and I bought a Rafala 6″ filet knife as I’m ever the optimist that we will be catching fish.
It was 4pm before we got back to the boat. The anchorage was more crowded than the previous days and some were clustered together maintaining the “herd” mentality which isn’t a good idea always.

Supper was an easy turkey burger and potatoes on the grill and leftover squash. We took advantage of the strong wifi and watched some shows on Netflix.

Later in the middle of the night with the tide change, we heard something at the bow of the boat. Phil jumped up and it turned out that a boat was 3ft away their stern at our bow! The Captain was at the helm with the engine on and they spent the next several minutes reanchoring. They had seemed far enough away from us before we went to bed, so we wondered if they had dragged.

First thing in the morning, the Cptn from the Bavaria 380 boat last night came over and apologized and to make sure everything was ok. He said they hit our anchor chain but not us and we agree. They have an unusual keel that has 2 struts and a torpedo shaped bulb between, which makes their boat swing differently on anchor. They hadn’t dragged but because of,how,they swing in relation to us, got too close. Amends made, they raised anchor and left soon after.

It was cool today, so we spent the day on the boat, me wearing long underwear tops and bottom and wool socks. I spent most of the morning updating the blog and checking out places in Essex where to meet Heather. We took the engine off the dinghy, made a sauce mix with tuna and added broccoli for supper and went to bed a little early in preparations for our early start tomorrow.

Low tide at Cape May Point is 4am and we should be at the end of the Cape May Canal to ride the rising tide up the Delaware Bay, through the C&D Canal and keep the favorable current starting back down the Chesapeake Bay. This is one instance that catching the tide at the appropriate time shaves hours off your trip! For the 71nm we traveled, it took us 10 hrs averaging 7 knots versus 14 hours at 5 knots to go, which you would have been lucky to get that speed. Most likely we would have been going 4-4.5 knots.

Tomorrow we will be going the 34nm to see Heather!